What do the Amish Believe Anyway 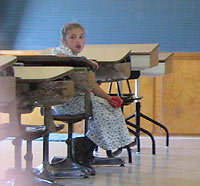 There is a strange fascination the world has with Amish quilts, Amish beliefs, and the Amish people as a whole. While the outside world is absolutely smitten with the Amish quilts they make and the way they choose to live their lives, the Amish have a bit of a love-hate relationship with the outside world that adores them so. As the Amish choose to live their lives simply and without the modern conveniences that the rest of us are dependent upon, they are also inexplicably dependent upon the commerce and business the outside world provides its communities. These invading "Englishers" gawk at their unique ways of dress and spend millions of dollars buying their Amish quilts and handcrafted furniture, but most do not know why the Amish exist in the first place or what exactly it is that they believe in anyway.

Another thing that is confusing to many outsiders is the lack of churches in the Amish community. While there are no formal buildings of worship, this does not mean that Sunday services are not held. Instead, the Amish conduct their Sunday services in each family home throughout the community. On a rotating basis, each member of the community will have to host the Sunday service for the entire congregation, typically once or twice a year, depending on the size of the community. As a result, Amish homes are larger than the average home and might have removable walls or basements added to accommodate such large gatherings. On the Sunday that the Amish quilter is chosen to host the Sunday services, much work must be done the week before in preparation. The house must be cleaned, furniture removed, and even fresh paint must be added to the walls to make the home of the Amish quilter presentable for the entire community. Enough food must be made for lunch after the three hour worship service and family, friends, and neighbors will most likely stop by to help the Amish quilter get ready for the event. It may seem odd that a Christian based group would not build churches to worship in, but for the Amish such buildings tend to shift the focus from the spiritual to the physical, so they choose not to build churches.

Another thing that you may or may not know about the Amish quilter is that she is a strict and pacifist. The Amish do not support war of any kind and many members have been imprisoned or killed due to their religious beliefs. This belief, while noble, has caused the Amish some serious problems along the way with governments and public opinion. While many young American men were being drafted during World War I, World War II, and the Vietnam War, Amish sons refused to go to war based on their religious beliefs. This was a major problem during WWI and WWII because many people felt that the German speaking Amish refused to join the war effort because they were German sympathizers, but in fact it was due to the fact that if they joined the military they would automatically be thrown out of the Amish church. Instead, the government created a Conscientious Objectors policy that allowed Amish men and others the option to work in an alternative service program away from home rather than join the military. This included working in hospitals, doing community service, or participating in agricultural programs for a period of two years in lieu of military service.

Another controversial issue that the Amish quilter has to contend with is her educational beliefs. Outsiders often think that the Amish are against education altogether, but this is not entirely true. The Amish quilter believes that education is very important, but she usually does not continue her formal education past the eighth grade. However, many Amish people do go on to get their high school diplomas, GEDs, and college degrees. The Amish quilter will send her children off to school each morning with a lunchbox filled with homemade goodies and expects her children to exceed in all subjects and lessons. Most Amish children walk or take a buggy to the nearby one-room schoolhouse in the community that is generally taught by a young, unmarried Amish woman. Public schools are thought to be a distraction for Amish children and not centered on what would benefit the Amish community, such as Christian values, farming education, sewing, and basic carpentry. All Amish children speak three languages. In fact, they usually do not learn to speak English until they attend school because Pennsylvania Dutch, a German dialect, is spoken at home. Amish children have access to modern books and do learn about the world around them, but the focus is usually on the things that will be useful to them in their lives on the farm and within the Amish community.

In many ways the life and beliefs of the Amish quilter are similar to that of any modern woman. She has morals and tries to live a good, fulfilling life. She works hard and wants no harm to come to others. The Amish quilter loves her children and wants them to get a good education and live happy lives. Just because the Amish quilter attends church services in a home rather than in a church, believes that her sons should not have to take up arms, and feels that her children would be better off getting an education in a one-room schoolhouse does not mean that she does not have the same hopes, wants, and dreams as any other modern woman. The life of the Amish quilter may seem quite different from our own, but in many ways we are all very much the same.