It’s strange how a people who do not attach importance to artists such as Monet or Picasso, have come to be known as artists in their own right. The Amish lifestyle is one of simple living, plain dress and a reluctance to adopt modern conveniences within their Spiritual beliefs. So to be accepted today as artists is a large measurement of accomplishment and one would say, out of character for the ways of the Amish. The Amish Quilt though, has been grabbed by collectors and antique dealers are works of art. It began as a item for dowry or an object for practicality, and changed over the years into a high demand work of art. After the 1970’s, when these quilts became identified for their artistic designs and workmanship there were stories of Amish Quilts being stolen off wash lines or robbed from homes. 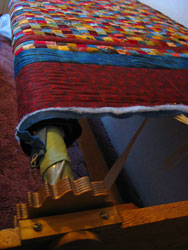 The Amish quilt that we are familiar with today is not how it originally looked. When the Amish first appeared in America, their beds were made with plain spreads and mostly void of design. Their ways were very similar to the Mennonites in their furnishings, dress and social ways. The Amish dressed in plain clothing and favored items that were simple in nature. This reflected their belief in not being flashy or worldly. The first Amish quilts that we see are in solid color, usually white; with a off white stitching. Even though the colors were bland, the Amish woman were able to stitch intricate designs into their quilts. Almost all of the traditional Amish quilt designs were simply adaptations of various squares and rectangles. As the Amish quilt began to evolve with its people, it took on some color but generally stayed within dark and solemn colors. Black is the dominant color, but some orders permit the use of other solid colors; such as green and red. Although the actual designs seem to be simplistic at first glance, the stitching itself forms vibrant patterns against even the plainest of backgrounds.

Different orders of the Amish handle the production and sale of the Amish quilt in varying regulations. Some of the Old Order Amish prefer to do their work at home, believing that they need to minimize contact with the outsiders in order to maintain their family life and Spiritual beliefs. Other Orders allow the use of sewing circles to accomplish their works of art. One of the patterns to come out of these sewing circles is The Circle Letter Quilt. From each letter a block is created that represents a life event and then passed around to 11 others. Once there are 121 blocks, the quilt is then stitched together to create a unique and personal piece of art. Tulips, baskets, feathers and vines were common patterns quilted in the borders and corners. There is a good rule of thumb concerning Amish quilts; the less creative the quilting and the larger the quilt, the more recent the year of the quilt’s age. 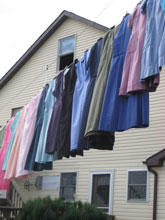 The Center Square, Bars, and Diamond in the Square designs were the most common in the early Amish quilts. The Diamond in the Square pattern was also known as "halstuch". It seems the border triangles reminded Amish women of the shoulder cape worn over their dresses (halstuch) which has a triangle shape in the back where it is fastened. Even though the solid Center Diamond pattern was very common, there were many variations. Sometimes the centered diamond had a saw tooth trim. Other quilters inserted the Sunshine and Shadow pattern into the center diamond. The Sunshine and Shadow designs, with their meticulously arranged squares of colors, are one of a kind works of art.

Even though these Amish quilts are considered works of art, the Amish themselves are hesitant in that definition as to do so would show egotism; a trait the Amish shun. There is a belief that if the prices of farmland had not risen over the years and the profits lowered for their type of farming, the Amish quilt would have never been sold to the general public. But as the rest of America embraces high technology and the lower prices that result, the Amish were almost forced to begin to sell different products outside their communities. In addition to the Amish quilt being sold; jams, jellies, canned goods, construction and wood working have been introduced to the American consumer. With the Amish peoples’ attention to detail, hard work and consistent values, each item produced is its own work of art. They make no difference in the quality of work from a jar of canned vegetables to a homestead barn to a quilt to lay across the bed. The Amish have never taken to mass producing their products, even with a high demand from American households to own Amish goods. Each item is painstakingly hand crafted one by one. One would think with such a small capacity for production, that Amish goods would become obsolete. The Amish quilt has proved over time to reach new heights of demand. Despite the small number of Amish woman who reproduce these quits, their reach across America has been widespread. 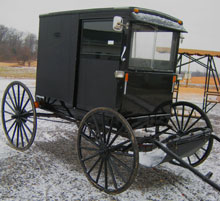 The Amish quilt produced between the 19th and 20th century put a standard on American quilt making. The color and design reflect the woman who stitched it. Often times, the pattern itself telling a story of her life, her emotions, symbolism and her Spiritual beliefs. The Amish quilt provides a background story of life within that particular Order once you understand the use and restrictions on patterns and textiles. Today you can find classes, books and websites devoted to the teaching of the Amish quilt patterns and techniques. You can purchase the quilts in stores, websites and magazines; seldom though will you be able to find out the unique history behind the quilt. There are a few research books that will help a purchaser identify the pattern and perhaps the area that the quilt was stitched in, but so many of the personal touches and sentimentality of the piece will be lost. It’s within these patterns that a great story lies. A story of a simple life, a faith in God and a belief of hard work.