The Languages of the Amish Quilter 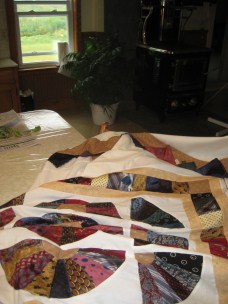 While life for the Amish quilter is often referred to as a plain and simple one, that is not to say that it is an easy and uneducated one. While it is common for an Amish quilter and all Amish children to go to school up until the eighth grade, they receive a comparable and in some ways a better education than students in the typical public school system. In fact, the Amish quilteris required to learn three separate languages in order to function within the Amish community itself and to be able to communicate with the outside world that surrounds her own. This includes learning to speak Pennsylvania Dutch, English, and High German.

At the age of about five years old, the Amish quilter begins her formal schooling and is sent off to the one-room schoolhouse that is located in the Amish community. Amish schoolhouses are owned and operated by the Amish and the teacher is usually an unmarried Amish woman from the community. The young Amish quilter, or little scholar as her family calls her, will spend the next eight years studying the same subjects as other schoolchildren her age, such as mathematics, reading, and writing skills. However, subjects such as science, sports, and sex education will instead be replaced with farming, building, and home economics. One major difference for the Amish quilter, however, is that she must begin learning how to read, write, and speak English. While most kids go to school already knowing the language that will be taught, the Amish quilter must learn the language first before she can begin studying other subjects. So, while the Amish quilter is born and raised in the United States, she is essentially a second language learner when it comes to the English language.

While the Amish quilter and her family generally prefer to separate themselves from the English speaking world that surrounds them, they also understand the benefits of being able to interact and communicate with their English speaking neighbors. Because of this, the Amish quilter will learn how to speak both Pennsylvania Dutch and English fluently. Since English is also the only written language that the Amish quilter will learn, it is essential that she understands English grammar flawlessly. However, the Amish quilter is at a bit of a disadvantage when it comes to pronouncing English words correctly in some instances. Since young Amish children typically have little contact with native English speakers during their early years, they are dependent upon their Amish teacher and books to help them with pronunciation problems. The Amish quilter will not have the ability to hear the language spoken correctly by friends, on the radio, or on television, so this can sometimes be a problem early on in her English studies. 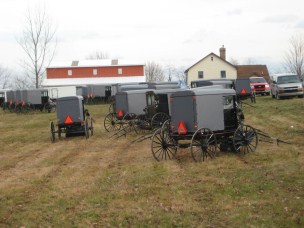 At the end of her eighth year of formal schooling, the Amish quilter will thoroughly understand Pennsylvania Dutch, English, and High German. This will allow the Amish quilter to fully be able to socialize and participate in everything that goes on within the Amish community while also being able to fully communicate with outsiders. This might mean socializing with her Amish friends and gossiping in Pennsylvania Dutch, being able to communicate with tourists who want to purchase her Amish quilts in English, or worshipping at Sunday services with her family in High German. All three languages are essential to the daily life of the typical Amish quilter.