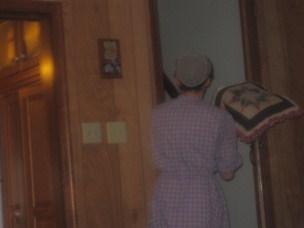 The Anabaptist Church began in Switzerland in 1525 when three men were baptized upon their confession of faith. It quickly spread throughout the German speaking lands and just as quickly was subjected to severe persecution by the established churches, both Catholic and Protestant. What was so unique about the Anabaptists that the enemy of God tried to extinguish this fire of God? They had three unique beliefs, unique from the established churches but very biblical:

(1) Believer's Baptism The Anabaptists held that a person must first believe the gospel before he could be accepted into the Church with the sign of water baptism. This is in accordance with the teachings of their Lord Jesus who placed believing ahead of baptism (Mt 28:19 and Mk 16:16).

(2) Pacifism The Anabaptists held that one could not obtain or protect his rights by the use of force. This is in accordance with the teachings of their Lord Jesus who commanded his followers not to resist an evil man (Mt 5:39 and Mt 18:36).

Today most Anabaptists do not hold to item 3 above, community of goods, but it was part of the original Anabaptists belief.

The Anabaptists taught, like Jesus did, that the way to the Kingdom of God is on a narrow path. Each of the three unique Anabaptist beliefs make the path narrower. Today the first one, Believer's Baptism, is widely held by many Christian religions, not just the Anabaptists. Believer's baptism makes the path narrower, but not too narrow. The second belief, Pacifism, is held by some Christian religions or segments of various Christian religions in addition to the Anabaptists. Pacifism really narrows the path to the Kingdom of God, few are willing to accept it. The third belief, Community of Goods, is held mainly by the Hutterian Brethren Church (which began in 1528). Community of goods makes the path way too narrow for most people. Other descendents of the Anabaptists today are Mennonites and the Amish (a major branch of the Mennonites). The Amish are distinguished by their use of horse and buggy for transportation and their non-use of electricity. The Hutterites are distinguished by their living together communally, usually on large farms, with all material possessions owned by the church, the members having no possessions of their own. The Mennonites are quite varied, from the conservative groups that dress plain with head covering on the women, to the liberal groups that are largely indistinguishable from their Protestant counterparts. There are also a number of Anabaptist groups that derived from the Mennonites that do not call themselves Mennonite. Other groups today that were influenced by the Anabaptists are the Brethren, the Baptists and the Quakers. The Brethren (Church of the Brethren, Brethren Church, Grace Brethren, Dunkard Brethren, and the German Baptists) are a Pietist group that began in Schwarzenau, Germany, in 1708 and adopted many of the practices of the Anabaptist groups with which they had contact. Some of the German Baptist groups are: Old German Baptist Brethren - car driving - very conservative. Old Brethren - car driving, pretty conservative. Old Order German Baptist Brethren - horse and buggy, non-electric. Old Brethren German Baptist - horse and buggy, non-electric, no telephone. The German Baptist churches are plain and usually have separate entrance doors for men and women as they sit on opposite sides of the church. Plain wooden benches (with backs), polished wood floors. Winter heat is frequently a wood stove. Summer, some have overhead fans. Nearly all have outhouses for the facilities out back. The above description of the various German Baptist groups could also well describe some of the conservative Mennonite groups. The Baptists (the big denomination, not to be confused with the German Baptists) are a Protestant group that began in England about 1610 by several men who had spent several years in Holland and came back with the understanding of believer’s baptism. The Quakers began with Puritans in 17th-century England who subscribed to the principles enunciated by such reformers as Kaspar Schwenckfeld of Lower Silesia, Sebastian Franck of Swabia, and Dirck Coornhert of the Netherlands, who denied the effectiveness of the sacraments, Baptism, and the Scriptures as a means of salvation. What sets the Anabaptists apart from other Christian religions is their view of Jesus Christ. Those Christian religions who do focus on Jesus, such as the evangelicals and other Protestants, tend see Jesus primarily as a child in the manger and as a sacrifice on the cross, he is their savior. This is what one sees in their songs and in their confessions of faith. The Anabaptists see Jesus not only as their savior but also as their teacher, the one who teaches them how to live their lives while on this earth. They believe that obedience to his commands is required; therefore they try to live as he taught. Thus they are a separate people, following the hard narrow path to the Kingdom of God that Jesus taught and lived. It might be accurate to say that evangelicals and other Protestants today stress the salvation aspect of the Gospel (evangelism, witnessing, building large congregations) and interpret this as faithfulness to their religion, while Anabaptist groups today are concerned with discipleship, seeing this as faithfulness to the teachings of Jesus. There are a number of people who identify Anabaptism with plain living. By plain, they mean beards on men, and head covering and dresses on women. Some go farther and say that a plain church is one where the members use horse and buggy for transportation (Old Order Amish and some conservative Mennonites). Those who stress the plain aspect of Anabaptism usually have strong opinions on what constitutes plain living, which frequently results in splits within the church over such matters as the use of telephones, rubber tires on tractors, and clothing styles.