Rumspringa and the Young Amish Quilter 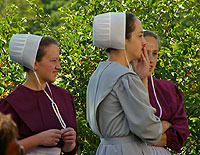 Probably one of the most fascinating aspects of becoming an Amish quilter and her decision to dedicate her life to Amish beliefs and the Amish lifestyle is the period of time that is commonly referred to as rumspringa or running around time. This is the time when young Amish people must decide whether they will become baptized into the Amish church and choose to live a plain and simple Amish life on the farm or will leave the Amish community in pursuit of a more modern life. This seems like an unusual custom for the religiously and socially strict Amish, but it is essential to keeping the Amish community as tight knit as it has been for hundreds of years and to uphold the strong religious beliefs of the Amish church.

What many people do not understand about the Amish quilter and her life in the Amish community is that she chooses to become Amish when she is a teenager or a young adult. While the Amish quilter is of course born into an Amish family, she is not truly considered Amish until she becomes baptized into the Amish faith. The Amish do not baptize their babies, like most religions, but instead allow each person to make the decision to be baptized on their own. This decision is typically made in their late teens or early twenties. The reason for this is that the Amish believe that joining the Amish church should be a voluntary act. They do not want to force anyone into becoming Amish and feel it is best to hold off on baptizing people until they make the decision for themselves to devote their lives to god and the Amish way of life. Of course, not all Amish communities follow this practice, but the majority of them do.

Before a young Amish quilter chooses to become baptized, she may spend several months or several years experiencing life outside the Amish community during her rumspringa. While this running around time is not necessarily a required activity for a set period of time, it is understood that before the Amish quilter decides to become baptized, she may want to experience some of what the outside world has to offer. During this time her parents may not necessarily agree with the choices the Amish quilter makes, but they will choose to turn a blind eye, so to speak, to her activities until she decides to settle down, become baptized, and start a family of her own.

After the age of about sixteen, the Amish quilter might go into town and see modern movies, buy new modern clothes to be worn outside the community, date non-Amish boys, and do just about anything else that a normal, everyday teenager might do. Since rumspringa is such a fascinating practice for those not familiar with the Amish way of life, many outsiders like to focus on the extreme activities that many of the Amish youth participate in. Some controversial books and movies, such as the popular documentary Devils Playground, have focused on the negative aspects of rumspringa. They show young Amish people smoking, drinking, swearing, doing drugs, and having sex during their time of experimentation in the modern world. While this is a fascinating juxtaposition between the plain and simple upbringing of the typical Amish youth and the negative temptations of the modern world, these are not the kinds of activities the typical Amish quilter might experience during her own rumspringa.

Instead, the Amish quilter might do some of the everyday things that most modern young people do, such as learn to drive a car, watch television, listen to music, go to concerts, or shop at the mall. As the Amish quilter gets older, she might even pursue her GED, take college classes, or get a job outside the Amish community. The Amish quilter might choose to travel the country or even the world and do things she might not otherwise have the chance to do. In 2004 there was a reality TV show called Amish in the City which followed five young Amish people during their rumspringa and exposed them to life outside the Amish community. These experiences included living with five other city kids in a Hollywood mansion, flying on a plane, seeing the ocean for the very first time, dressing in modern clothes, and even learning how to use modern oddities such as microwaves, dishwashers, and parking meters. The show did a good job of focusing on how, while they were unfamiliar with some of the everyday customs or activities that most Englishers take for granted, the Amish youths wanted all the same things as their city counterparts did, such as an education, a family, and happiness.

While life outside the Amish community can offer fun, excitement, and new experiences for the Amish quilter, it also offers fear, frustration, and loneliness. After her rumspringa time, the Amish quilter will most likely return to her Amish community, become baptized in the Amish church, choose a husband, and live out the rest of her life on an Amish farm. This is true for approximately 80 percent of the Amish youth of today because growing up in the Amish way is really the only thing that they have known and are comfortable with over the long term. The outside world can be difficult for the Amish quilter to adjust to permanently because she generally has to catch up on her education, support herself with little help from her Amish family, try to blend in with a world that is strange and unfamiliar to her, and cope with the fact that the modern world is one of individualism rather than community. These factors can be difficult for the Amish quilter to deal with and she most likely will return to the familiarity and open arms of her Amish community.

There is a third option, however, that the Amish quilter has to choose from. Some Amish people find it just as difficult to commit to a life of such strict discipline, so they often join a Mennonite church nearby their own Amish communities. This is often a good compromise for many Amish quilters because they have the security of the closely related Anabaptist beliefs of the Mennonite church while also having the freedom to drive cars, use electricity, wear modern clothes, and pursue an advanced education. The Amish quilter can even continue to make Amish quilts, but they will more appropriately be called Mennonite quilts from that point on!

In the end, rumspringa gives the Amish quilter the opportunity to decide for herself what kind of life she wants to live. It is not an easy decision to make, but it is easier to commit to a lifestyle that you have chosen for yourself rather than one that has been chosen for you. For this reason, rumspringa is a unique opportunity that lets the Amish quilter choose the lifestyle she wants to live, a decision that even some Englishers do not get to make. This free will choice keeps the Amish community strong and committed to their strict and unwavering beliefs.