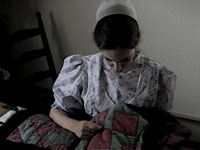 Quilting is a form of practical art, that has been around for centuries. The first surviving bed quilt dates back to 1395, and after that there is a lot of documentation that shows that many of Europes Kings and members of royal families had quilts in their inventories and were given (and gave) quilts as gifts. It is recorded that King Henry VIII of Englands fifth wife (Queen Catherine) was given a gift of two dozen quilts in the 1540s. In 1609, there is in the inventory of King James (of England) a description of a quilt made of fustian (a linen type cotton material), lined with taffeta and filled with wool, then sewn with silk. Eighty years later, in 1689, the inventory of Captain John Kidd, of New York, distinguishes between quilts and blankets, and lists them as two separate entries.

The earliest dated Patchwork Quilt from Britain is from 1718, and the earliest surviving Patchwork Quilt made in North America (in Canada) is from 1726. A Wholecloth Quilt made from white linen, is part of the Smithsonian collection, and is signed and dated 1760. The earliest Medallion style Patchwork Quilt known to be made in America was made in Maine in 1785 (both signed and dated). The Floral Wreath Applique was a popular design in 1790, and was often quilted with feathered hearts, a quilting pattern still in use today that displays a womans intricate stitching and handwork skills.

It is pioneer women, who overcame limited supplies with great creativity and perserverance of spirit, and brought the humble Patchwork Quilt into the fabric of American history and society. The Pioneer Quilting Bee was a spring and summertime way of socializing after being housebound all winter (and of finishing the quilt tops that were pieced throughout the winter months). Because of the size of quilt frames, and the small size of the colonial home, quilts were often quilted in one sitting during a Quilting Bee. Although most women did their quilting at their own homes, these Quilting Bees were a fun and fruitful way for the rural woman to be able to connect with neighbors and catch up on all the news of the area - and still be industrious.

Often, for special quilts, only the best stitchers of the area were invited to be a part of the special quilting bee, so it became important for women to perfect their stitch on their own, often during the winter, so that they would be included when special invitations were given. There are also examples of inventive families putting the quilt frame on a pulley system, often above a bed, to be able to suspend the quilt during the night, and lower it to quilt on during the day, when the bed would not be used.

Today, Patchwork Quilts are a colorful and vibrant way to bring a bit of history into your home. An Amish Quilt is practical art that can transform a room, whether draped over a sofa, hung on the wall, or on your bed. A handquilted Amish Quilt gives warmth and displays care and love to all who see it.