What are some contrasts comparing the Amish to the Modern World and the people that inhabit it? This is a list that could go one for a very long time, but in simple terms, anything created or made after the mid 1800’s is not used in daily life. This is why you will see horse drawn buggies but no car or trucks in their communities.

Taking months to complete a hand quilted Amish Quilt is something that the English would not have the patience for. After cutting out the pieces using a pattern that has been handed down in her family, the Amish quilter uses her treadle sewing machine, that uses no electricity, but instead is powered by the motion of your feet. The quilt top is pieced together, and then placed in the huge Quilt frame. Then the quilting starts, and that can take months to put every stitch in one at a time by hand. Tremendous works of art, the Amish Quilts make heirlooms for generations to keep and cherish. 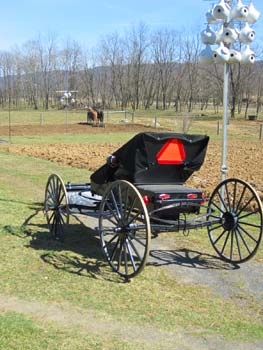 That is one of the simpler contrasts that are immediately noticed. Another is the way they grow and prepare food. Most in the outside world get their food supply from the grocery store. The Amish grow their own or raise it. There are many ladies in the modern world that have never killed a chicken, plucked its feathers then prepared it for dinner. This is almost an everyday occurrence by the ladies in the Amish community, but rarely if ever done by ladies in the outside world. Many of them don’t even think they could kill a chicken. This is what the grocery stores have accomplished for the modern person. They have separated us from seeing where our food supply comes from. The Amish have not been desensitized in that same manner as most of the people who live in the modern world.

Anyone from the outside world that has ever drank too much alcohol knows they have done something will they regret. They also have to wake up the following day with a hangover. In the Amish community, alcoholic drinking is not accepted because of not only what has happened in that night, but also the money spent on the drinks. It is basically wasted with nothing to show for it. The Amish on the other hand do nothing but produce items with the time they spend awake. The only time they are not making or repairing something is when they are worshiping our Lord. This makes the members of the Amish community the most productive in the nation.

The way the Amish forgive each other is another sharp contrast to outsiders in the modern world. The Amish are a close nit community that has learned to live with the strengths and weaknesses of its members. They also allow their children to explore the outside world. When they return back to the Amish community to live, no matter what they did in the outside world, it is forgiven. In most modern families in the outside world there is jealousy and grudges directed towards other family members. These can last a lifetime.

All of these things can be observed, but the largest contrast between the Amish and outsiders is probably the way each group of people think. The Amish way of thinking is before they do something they ask themselves, will this be honoring God. If the answer is no, they do not do it. For the outsiders they look at something and ask themselves mainly, can my life benefit from doing it. Now that is a contrast if I have ever heard one.