One of the most conservative orders of the Amish; The Old Order Amish, are descendants of the 16th century of Anabaptists. The Old Order Amish are characterized in the modern imagination by their beliefs on use of transportation, use of farm horses, their refusal to use telephones or electricity within their homes and their stance on a more traditional style of dress and their Amish Quilts. Most Englishers; which is the way the Amish refer to anyone who is not Amish, believe that the Old Order Amish is the only “type” of Amish that there is in North America.

According to records from late 2008, there are Old Order Amish communities in 27 states in North America and one in the Canadian province, Ontario. The Amish community is usually represented by the doctrines of discipline and church life and consists of all the specific church congregations. There have been 70 directories published containing information such as head of household, birth dates, church memberships and addresses as a project to trace disease through family lines for genetic research. Some of the settlements have become so large and contain so much diversity from the different districts that as many as three editions have been created inside a 15 year period. It would be interesting to know how many Amish Quilts have been made since the Amish have arrived.

In 1900 there were around 3,700 Old Order Amish in America. According to the records taken in 2008, the population had increased to 231,000. Because of low mortality rates in infants, the typical seven live births per Amish woman and the abolishment of any type of contraception, the Amish is one the most rapid growing populations in the world. Even though the Amish are growing, the Amish Quilter is getting harder to find.

The increase in population for the Old Order Amish has been rapid and that has constituted a moderate change within the Amish community. Population demands have advanced the cost of land and forced shortages of needed farmland that is available to the Amish society. The Old Order Amish have answered this change by utilizing farm management strategies within the larger society by focusing more on the production of hogs for market and increasing the output of milk by enlarging the size of their dairy cow herds. The Amish have also been forced to reduce their farm size and crop production because of the decreased availability of farmland. 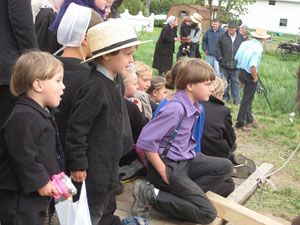 From 1974 to 1984 the Amish attempted to settle 71 new communities in a response the demographic and economic pressure to move to new parts of the country. Not every community of the Amish that is started is successful and in that same decade 11 communities failed to exist. Two of these failed Amish communities were the experimental settlements in Paraguay and Honduras.

One option to prevent having to settle new communities is that many of the younger Amish families have employment outside agriculture. According to the same records done in 1900, less than half of the heads of households in the largest three communities were in agriculture. Many Old Order Amish are working in small businesses which practice the construction of cabinetry, construction, black smithing, buggies and horse drawn farm equipment, etc. Some of the Amish have begun to seek employment in recreational and mobile home industries. The benefit to working off the farm land is that these Amish household live on plots of land that are smaller, have more time for leisure and available cash. There are many older Amish women making Amish Quilts to gather in some needed cash.

Another aspect that has changed the Amish way of life is the result of involvement of the government and the intrusion of tourists. The government has allowed for roads to be built through agriculture areas and have mandated such things as the proper materials to shoe horses and signs that must be placed on slow moving buggies. Once the government decided to consolidate public schools locally, the Amish instituted their own curriculum and schedules to compliment their way of life. These school schedules allow for children to graduate younger and be out of school to help with the planting and harvesting schedules. Many of the Amish have used these government intrusions to withdraw even further into their settlements. One of the areas that Amish have not been able to withdraw from is tourism. Tourism has interfered heavily in the day to day life of the Amish. Although the Amish have begun to depend on the financial benefits of Tourism in their livelihoods, they barely tolerate the ways of the Englishers. The most offensive intrusion is picture taking. The Old Order Amish do not believe in self photography and see it as a sign of vanity and pride which is a sin. They have had to put up with these types of interferences from the Englishers as they begin to sell their products and produce in markets.

Since 1890, written publications have been a voice of importance to the Amish. It is especially needed due to the great growth of the Amish population. A newspaper called “The Budget” is a weekly newspaper produced by the non-Amish. Amish scribes send in written reports about their communities to be published and distributed among the different communities. Since that time other publications have begun. Amish-produced publications with a large readership in 1998 are the Die Botschaft and The Diary published in Lancaster, Pennsylvania, and three monthly periodicals (Family Life, Young Companion, and Blackboard Bulletin) published in Aylmer, Ontario by Pathway Publishers. These publications contain church schedules, funerals, births, marriages and any other important notices with the settlements.

In many of the Old Order Amish households, change is being seen. The use of neighbors power farm equipment, secular publications and even the use of telephones or electricity by the Amish are becoming more frequent. This should not be interpreted as a disappearance of the foundation of Old Order Amish, but rather a reflection of the forced influences our society and government has had within the Amish community. By joining our work forces the Amish have had to adapt from some of their more traditional and stricter rules as ordained by the Orndung, but they have not strayed from their strict conservative religious practices and views. Although there have been these apparent changes, it is more of a forced tolerance rather than a preferred way of life.