The Amish are nothing like what is portrayed on TV shows that are currently airing on the networks. Like most things seen on TV by the American audience, the so called true events are greatly fictionalized and sensationalized to help keep the viewers attention and interest in them.

A majority of the TV shows depicting the Amish are not taken in the community where they were born or raised. The Amish communities do not own or use of electronic items. Full face photos and interviews with outsiders, especially interviews recorded by TV cameras would not be allowed by members of the Amish.

Even the show made by the National Geographic Society was about the adventures of an Amish member outside of their community. Many of the episodes were of visitations to ex-members of the Amish community that are now choosing to not live with the Amish and have decided to not stay "Plain", but have gone off the opposite end of the spectrum. 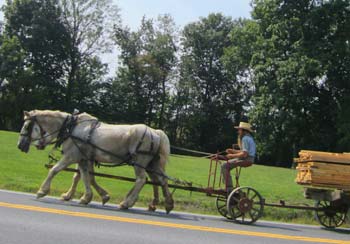 Like all portions of our society, the Amish do have disagreements within their ranks. Some of the shows exploit these disagreements for the viewing pleasure of their audience. There may be beard cuttings as a consequence for an infraction against the community, but viewed from a proper perspective, this and other forms of punishment the Amish may use are not harsh compared to how our society will quickly sue and prosecute others. This is a religious community dedicating their lives to a simple way of life as they feel God had intended for them to live, and forgiveness is a large part of their beliefs and life, and the TV shows do not show that, because it would make for dull and boring viewing.

To fully understand these shows one must also understand most of the Amish members are educated within their closed communities. The belief is that only a basic education is needed to live a simple life. Because of this there are no high school or college graduates from Amish families that are practicing their faith.

TV shows that have teens living in the real world are showing teens Running Around time. There is a time each teen is allowed to leave and then return to their faith and heritage if they so wish to do so. This is an established time where the youth are permitted to live in the world like you and I, so they can fully know before a commitment to their faith and Plain lifestyle, what they are choosing. They are given this Running Around time so they can make an educated, experienced decision. If they decide they do not want to live in the world, but want to join the Amish church, upon their return, they are welcomed with open arms and are still a part of their family and Amish community. For those who have never joined the church, but wish to remain in the outside world, they are not shunned, but they do give up being a part of the care and support of the Amish community. They are shunned only if after their teenage running around, they join the Amish church, but after that commitment to their church and their family community, they then leave the faith they gave their commitment and allegiance to. Shunning is a tool the Amish use to encourage the folks who have given up their faith, to realize all they have lost and to come back. Shunned people can decide to return to their Amish faith, and will then be welcomed in their Amish communities.

While the Amish TV shows are interesting to watch, like all reality TV, they must have good ratings to last. This is why these reality TV shows have scripts, yes scripts. The shows do not depict true events. Scripts are written for shock value so the viewership will grow and good ratings maintained for long periods of time.